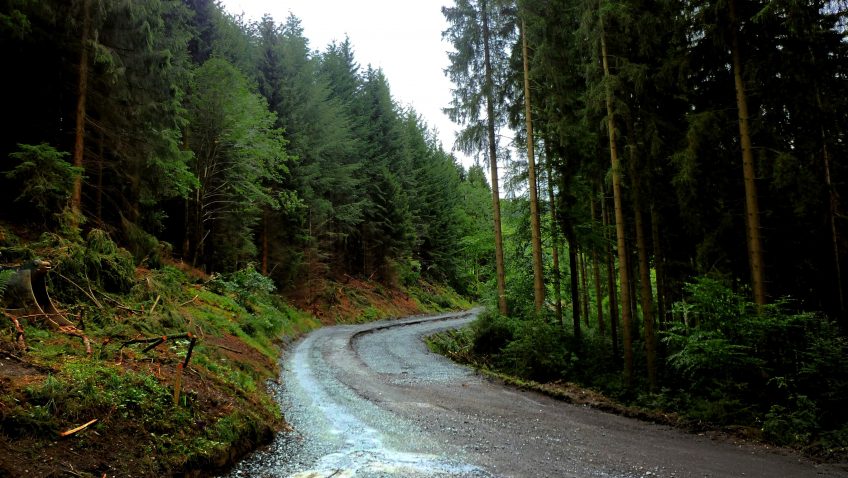 My buddy Alex is leading the way on a ride in Sauerland, Germany. I’m having a hard time keeping his wheel as the road slowly begins to climb again. For a moment I wonder: “What the #*&@ am I doing here?” Full gass we pass a road sign saying the road will be closed after one kilometre. Shortly after we passed the sign a cyclist is coming from the opposite direction. “The road is closed” he shouts while he makes hand gestures to support his message. I manage to catch a breath and shout “Thanks!”.

Not much later the road indeed is closed. Two iron barriers on each side of the road with some barrier tape span between it, were placed to prevent people from going through. “It doesn’t look that bad” says Alex as he rides up until the road block. He is right, it doesn’t look bad at all. Only the top layer(s) of the tarmac are taken off. What remains looks like a gravel road. “Let’s do it then” I answer as I pull up the barrier tape as an invitation.

The first meters on the closed road we ride slowly, looking around if nobody is watching. But the coast is clear and so the pace goes back up again. As the road starts to climb steeper it’s time for me to let Alex go. “Nature calls, see you up there!” I shout behind his back. Alex put’s his thumb in the air as a sign he got the message. Not much later he is out of sight.

After I watered some plants I take a look around. I’m completely by myself now. The only things I hear are the wind blowing through the trees and a bird singing. I jump back on the bike and continue the climb on my own rhythm. The road bents to right and suddenly the road width got halved due to the road works. Combined with the gravel it adds a extra level of adventure to the ride. It makes me feel like I’m climbing somewhere in the Alps or Pyrenees.

The gravel crunches underneath my tyres. Further up the road I see another bent coming. I wonder what would be behind this one: “Is the road surface going the change? Or will the road get even smaller than it already is?”. When I look down it seems that my legs are spinning faster. My Wahoo conforms it, my pace is going back up again. And then I know what I’m doing here: it’s the adventure, the unknown around the corner that that drives me.