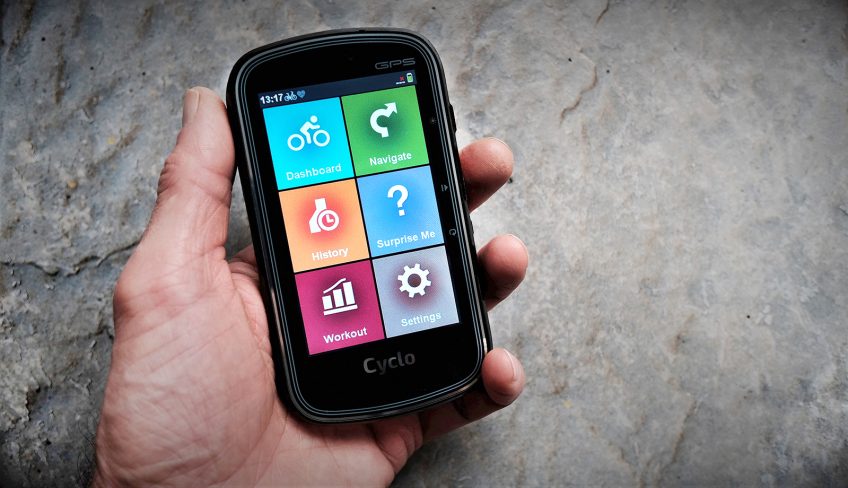 A while ago we had a close look at the Mio Cyclo 505. It’s highlights – at least to us – were the ease of use and at the same time abundance of functions it had to offer. The Surprise Me function was good fun and was ideal when you wanted to jump on your bike and just ride a route without having to paste something together beforehand.

When we were offered to review its successor Mio Cyclo 605 HC we took the opportunity with both hands. And both hands is what we needed. The Mio Cyclo 605 is large, really large. It measures almost 130x74mm and 22mm in height. As you can see, it covers my entire stem on my road bike. Because of the twist-on mount there is little room left for any bells and whistles on your handlebar. All of this to house a large touchscreen. If you think the competitor Garmin Edge 1000 is large with its 3″ screen, then this one is truely a beast with its 4″ touchscreen. 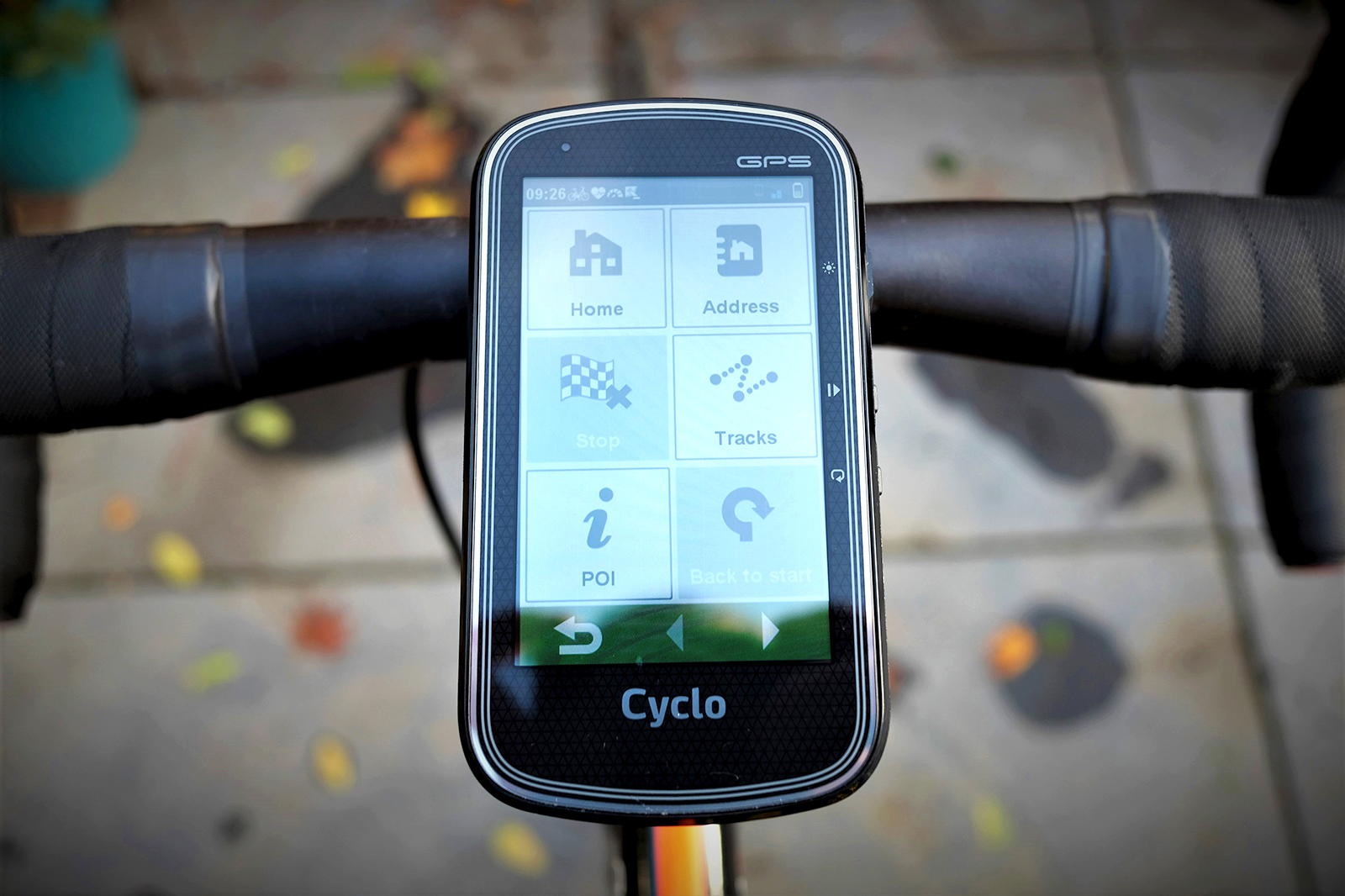 But why? Why do these navigation devices get bigger and bigger, much like our smartphones? I personally don’t understand it. Unlike on a smartphone, you don’t watch photos and videos on your bike computer. The only real advantage of the extra large screen is the detailled map view. And that is exactly why you should consider this one. Like on its predecessor the Open Street Map (OSM) is pre-installed. I love it. The maps are highly detailled, accurate and even cycle paths are highlighted. The best map we’ve seen so far. 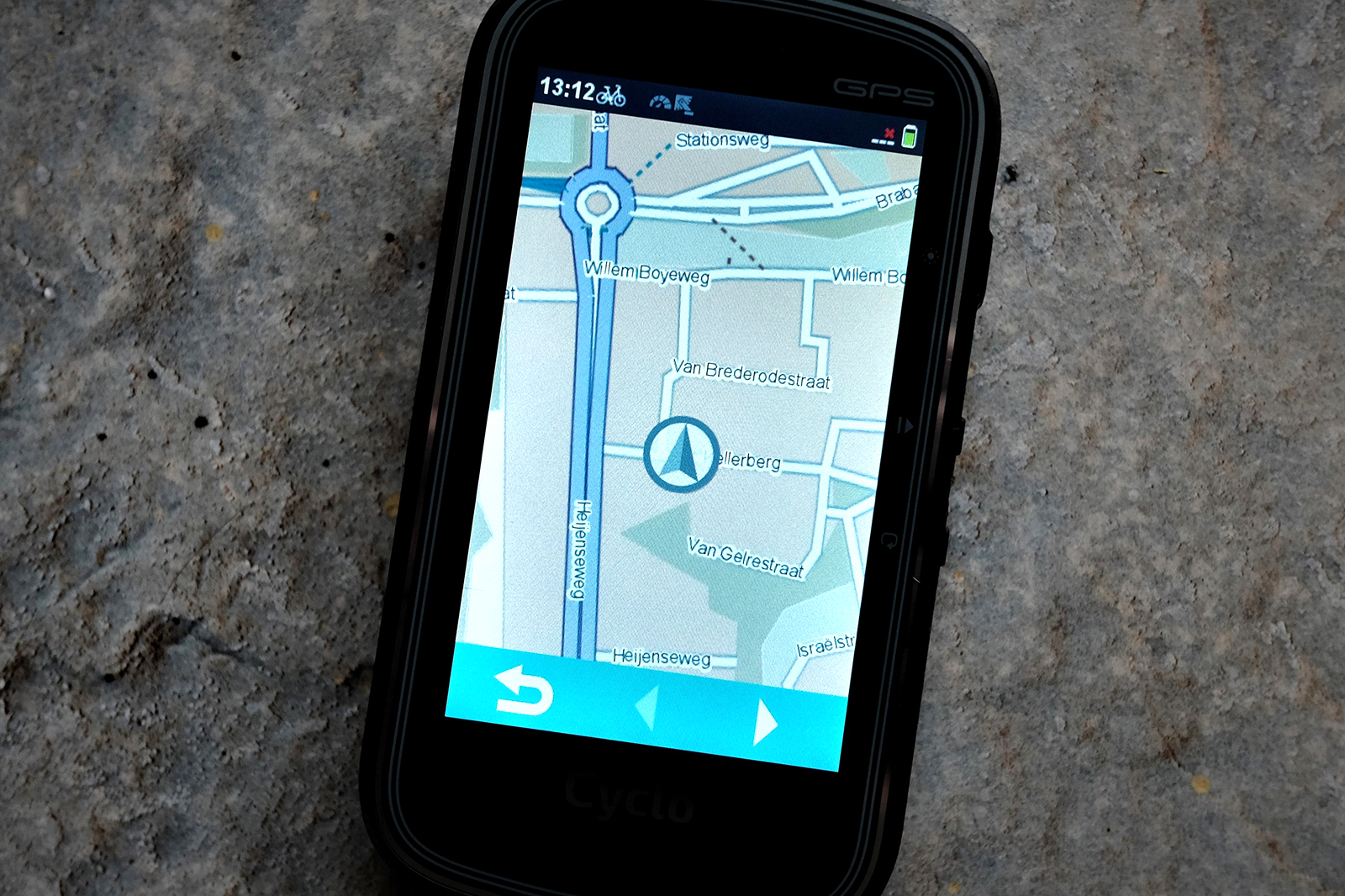 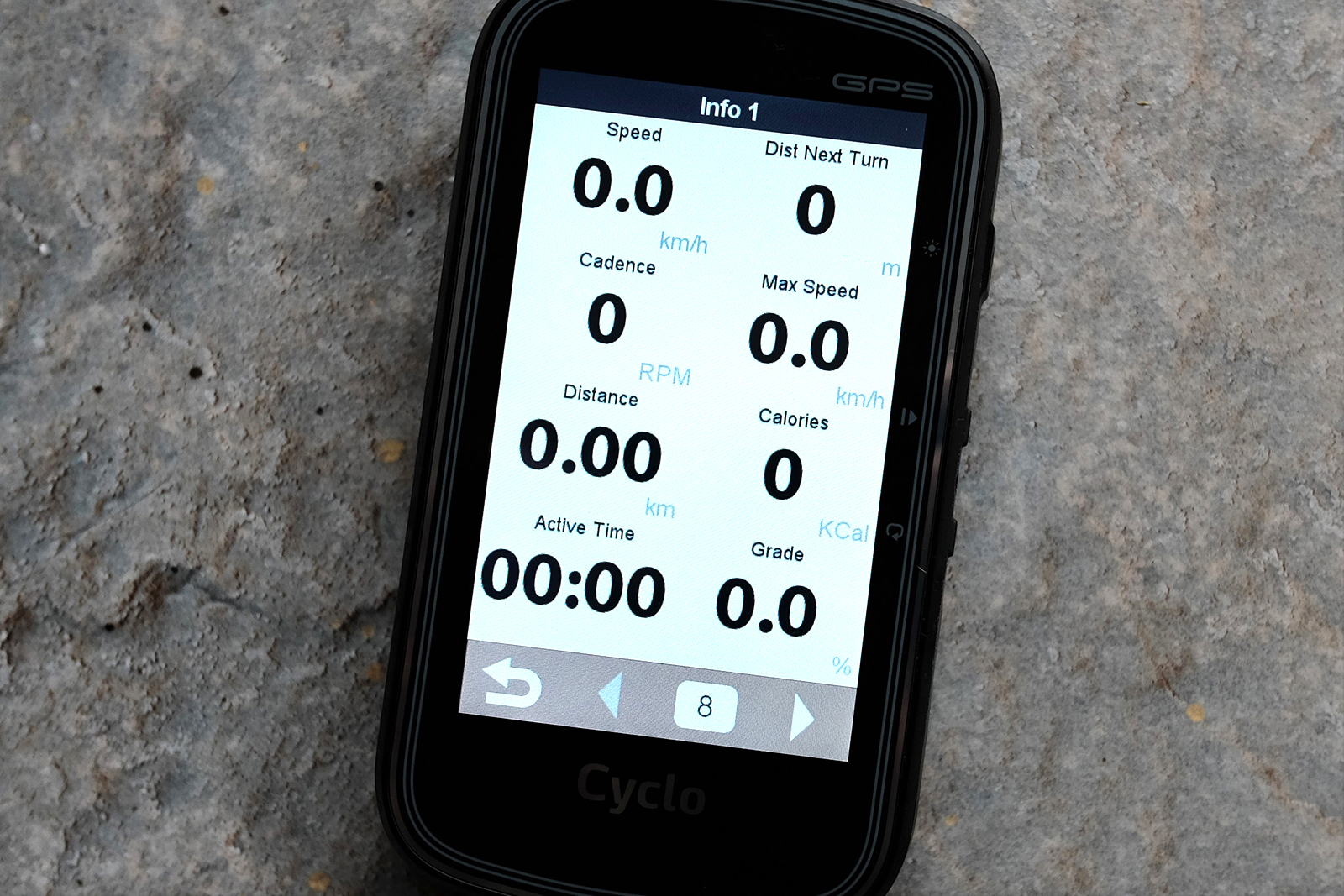 Room for lots of figures

If you are familiar with Mio’s interface, you won’t have any problems operating this one. If you’re not, you probably won’t have any problems either: the menus are intuitive and easy, with the smart use of six colours on the main menu and corresponding sub menus. In fact little has changed since the Mio Cyclo 505. Have a look the predecessor over here for a closer look at the screens.

The one thing that annoyed me with the 505 was its lag when using the touchscreen in the map view. It got worse when a long route was loaded. Needless to say I was pretty excited to try out the 605, assuming this would have been taken care of. Sadly it wasn’t. Zooming in and out, operating the digital buttons to switch screens, every touch takes close to a second for the 605 to respond.

Another thing with touchscreens is that you can’t operate them blind, as you can’t feel the buttons. Because of the lag multiple seconds go by when looking at the map, zooming out, swiping to the right direction. As you all know, when cycling at speed a lot of things can happen in a few seconds … 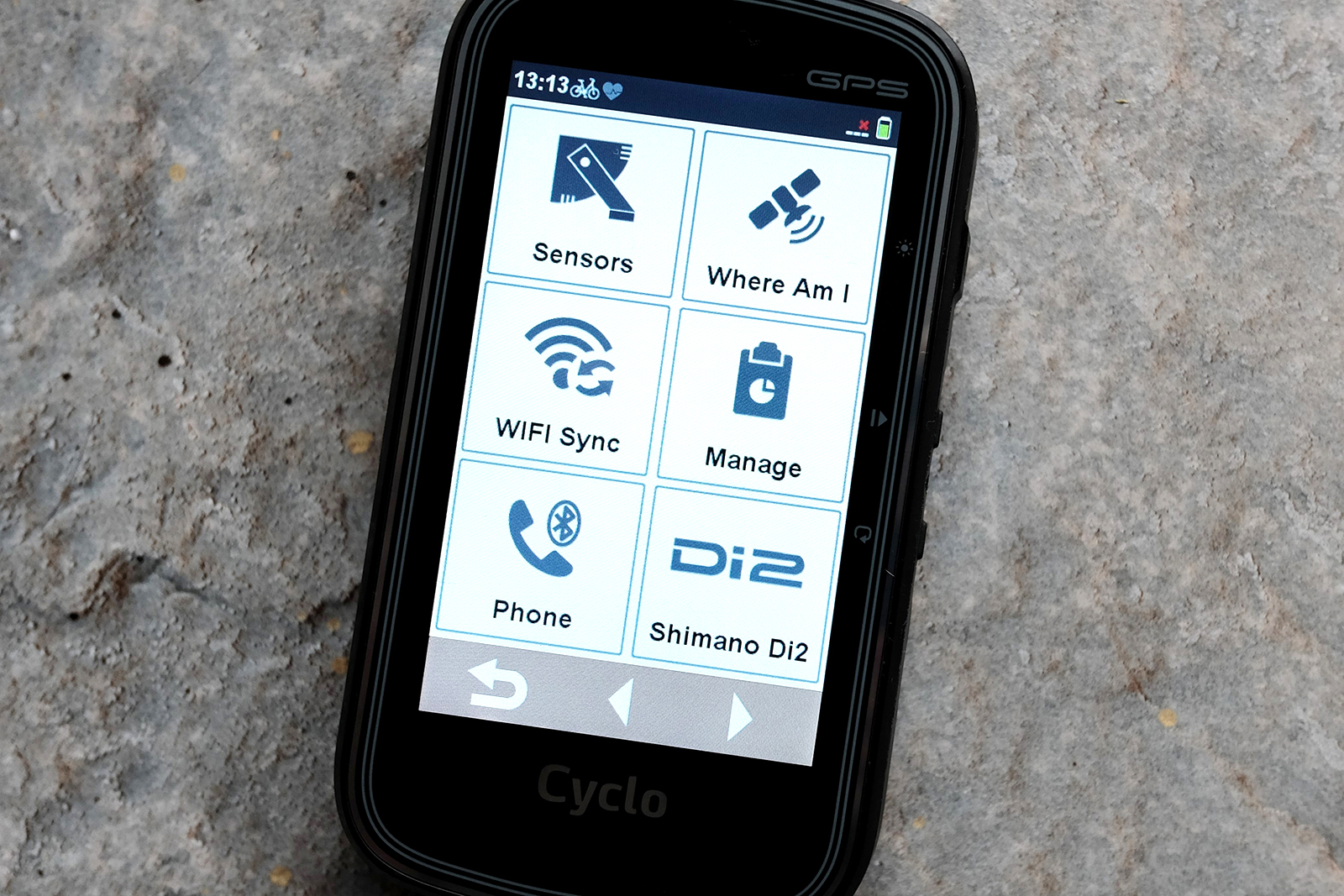 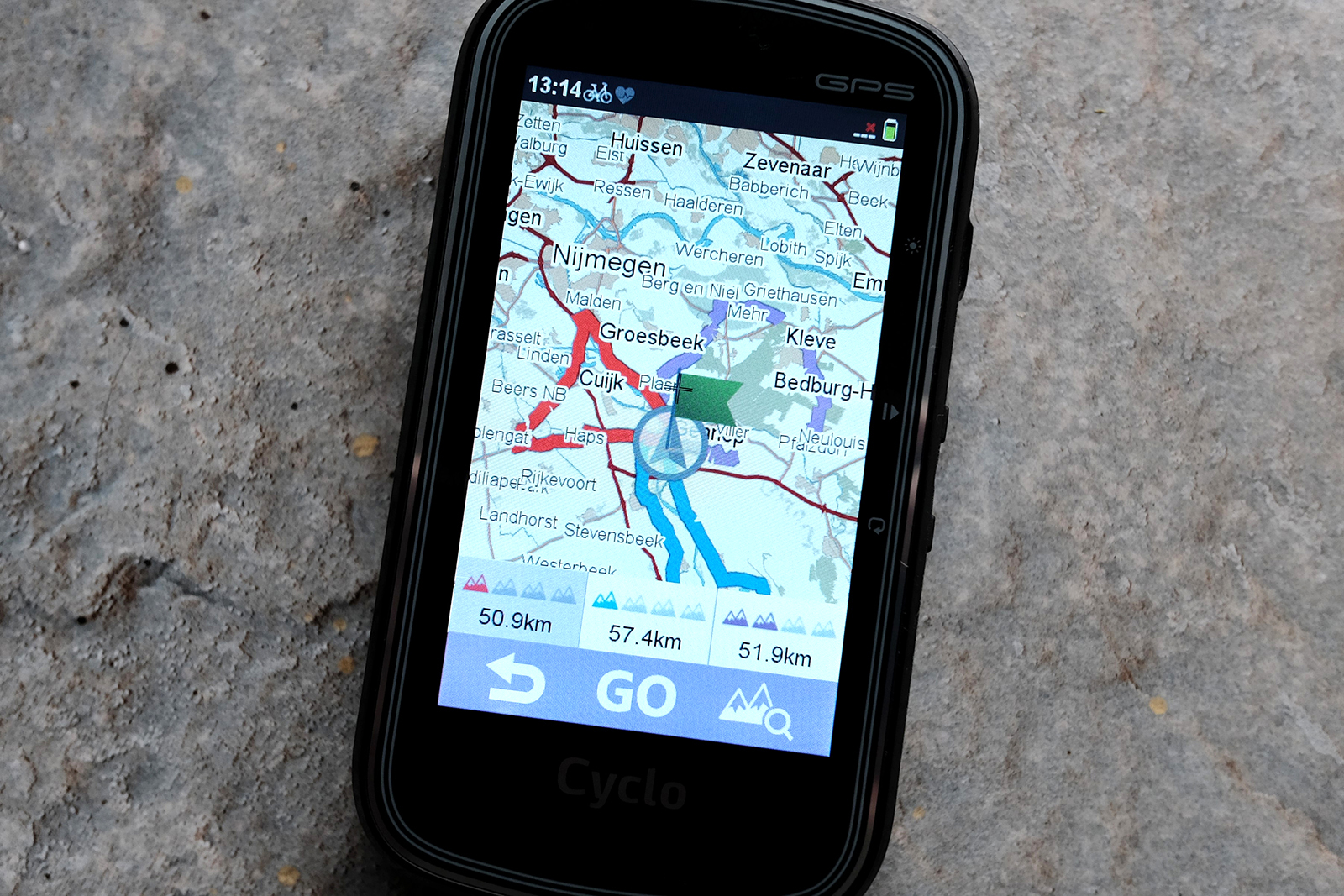 Surprise Me function, for spontaneous rides wherever you are

A downside to such a large screen is its high energy consumption. Still Mio claims over 15 hours of use without charging. Without a doubt this was measured with the brightness of the screen set to minimal. We didn’t manage 15 hours, for one because you definitely have to turn up the brightness on a sunny day. A huge screens goes along with a fairly large battery. The Mio Cyclo 605 weighs 177 grams, which actually isn’t too bad compared to the 114,5 grams of the Garmin Edge 1000.

Wifi, ANT+, Bluetooth are all supported. Upload your activities automatically, connect your cadance and heart rate sensor in a heartbeat, receive messages (WhatsApp, Twitter, Facebook Messenger) on screen via your smartphone. Use Strava Live for real time feedback chasing your PRs and attacking KOMs.

One advantage over the Garmin Edge 1000 is its price. For the sum of € 449,99 you will get the Mio Cyclo 605 HC bundle, including a heart rate sensor, cadence sensor, one mount (sadly no out-front mount), AC adapter and the pre-installed map. In comparison: the Garmin Egde 1000 bundle will cost you € 609,00.

The Mio Cyclo 605 HC is beast in size and function. The biggest highlight is its map view, which makes this device an ideal companion for the adventurous touring cyclist who wants to discover smaller roads and tracks. Its size, combined with the slow responding touchscreen, the Mio 605 is less suited for the competitive cyclist riding a race.

In terms of functions there is not much left to wish for.

Pros: Surprise Me feature, price, OSM map pre-installed, easy to use
Cons: slow touchscreen, size can be too large