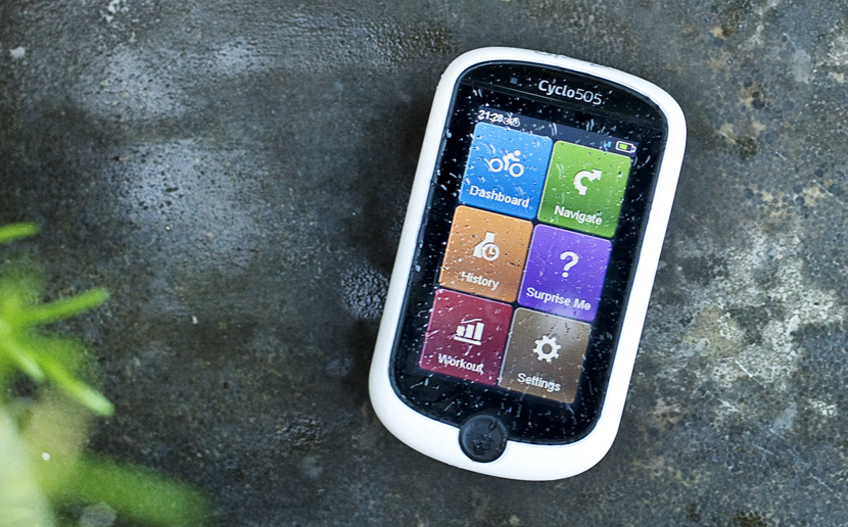 GPS bicycle navigation and the well-established brand name Garmin are often used as synonyms. But other brands like Teasi and Sigma are increasing their market share. And Polar added GPS navigation on its V650. But how about the Belgian manufacturer Mio with its Cyclo range. We had the opportunity to test the Mio Cyclo 505 on a five-day bike trip in England.

Compared to my older Garmin Edge 800 the Mio Cyclo 505 is a bit bulkier with its larger 3,0 inch touchscreen with a resolution of 240 x 400 pixels, exactly the same as the Garmin Edge 1000 screen. The screen displays sharp text and fine lines on the maps. The Mio Cyclo is also slightly heavier than my Garmin Edge 800: 129 grams (checked) versus 98 grams, but nothing to worry about too much.

Maps, we all love ‘em

One great feature is that the Open Street Map (OSM) is pre-installed. I like that map a lot. It is comprehensive and navigating with this map causes fewer errors and strange turns. 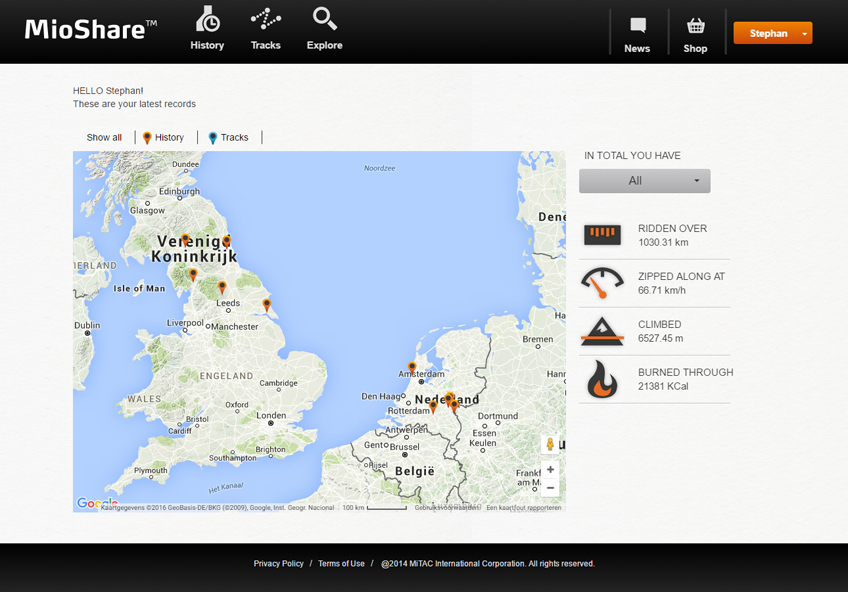 Like Garmin, Mio has its own online software called MioShare (www.mioshare.com). Here you can view your rides on a map or on a calendar, create routes or simply copy routes from other Mio cyclists. The online application is pretty straightforward and uncomplicated. There is an option to synchronise your newest rides automatically to Strava. That is a big plus, since Mio doesn’t have an app for your smartphone.

Much like its online software, Mio wants to keep the Cyclo 505 device itself simple too. The main screen consists of six large buttons with different colours. The Dashboard is fully customisable with up to four info screens containing up to eight fields in which you can choose from an endless amount of functions, and separate elevation, navigation and map screens.

POI, but where to stay? 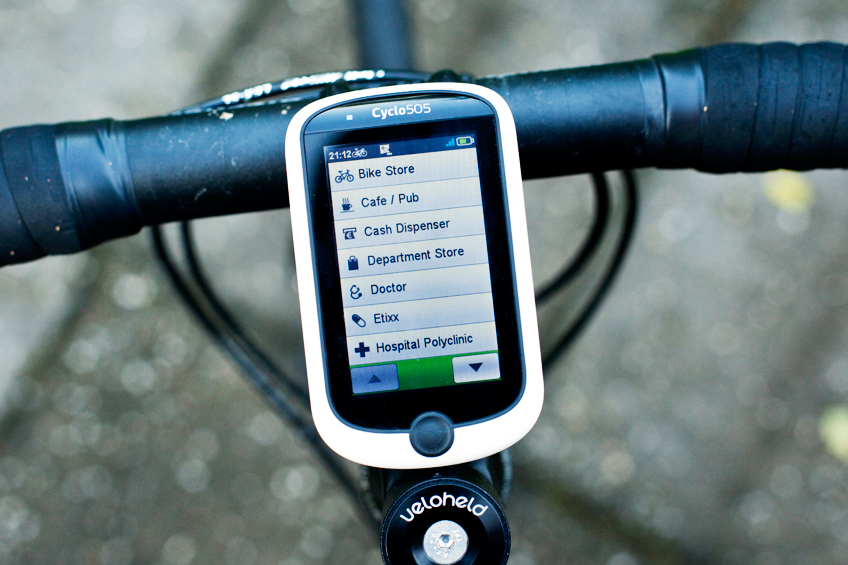 On the Navigation screen you can choose an address or a track you have uploaded to the device earlier. And like most navigation devices this Mio has a POI (places of interest) function. You can search them by name or by category. Mio even added a dedicated button for bike shops. All necessary categories are there, from gas stations to pharmacies, police stations and restaurants … except for one: places to spend the night! This needs to be added Mio, hopefully in your next firmware update.

The big purple button with the question mark beholds a unique feature. It is a navigation function, but not your standard navigation in a straight line. You can pick an address or a place on the map, or, if you want to start and finish in the same place, choose the loop option. Type in the distance you want to ride and the Mio Cyclo 505 comes up with three entirely different routes. At one point in England we had enough of cycling on a big road with lots of traffic. We gave Surprise Me a go and it worked really well! Two routes with the given distance and a longer, probably more scenic one. Even the altitude profiles are calculated.

A couple of days ago I tried Surprise Me again in the Loop mode. The ride started out as nothing new. I was about to go my own way when it suddenly started to beep for a right turn. A bit surprised I took the turn and found myself on a smaller road I had never noticed before. After some more back roads I ended up on a bigger road and it started all over again. It was a great mix of fast cycle paths and idyllic country roads. And yes, they did take me home. Surprise Me – this nice feature certainly did. 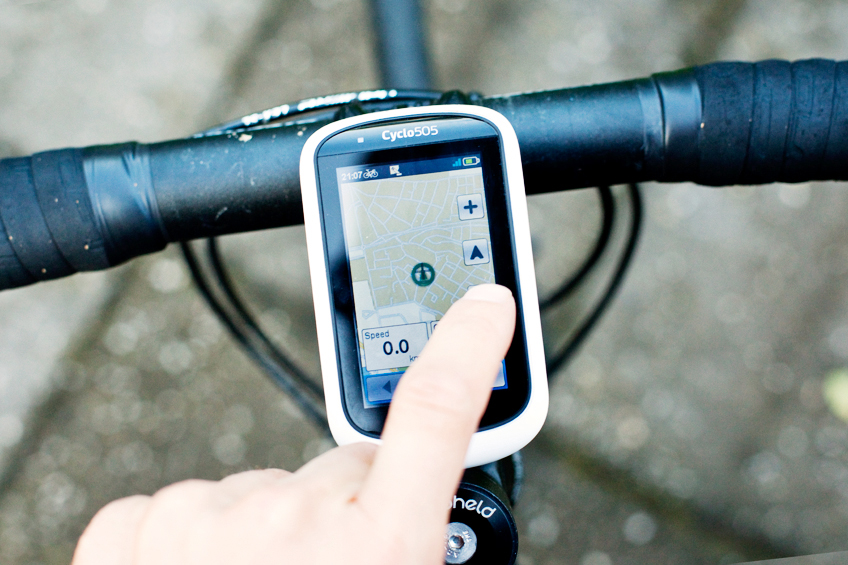 After having started the uploaded track I noticed a change in the device’s behaviour. At first it was snappy (enough) when pressing buttons and flicking through the menus, now all of a sudden I had to wait a full second before the screen responded to my finger. And another second or so before it actually acted upon my request. . The lag is slightly annoying when you are heading for an intersection and want to check the map quickly. The same goes for the zoom scale on the map. The uploaded track was quite long (about 250 kilometers). I noticed that using shorter tracks made it respond a bit quicker. Fortunately, the navigation function itself doesn’t suffer any lag – just don’t touch it.

As connectivity is the keyword in our digital lives, cycling computers cannot stay far behind. And Mio certainly doesn’t. First there’s ANT+ for the heart rate and cadens sensor. Since ANT+ is an open protocol it works with sensors from other brands as well. I took my Garmin heart rate monitor on a Polar strap and connected it to the Mio. It worked. Same with the Garmin cadens sensor that was already on my bike. If you don’t have these sensors already there is a 505 HC version with heart rate and cadence sensor for only 30 euros more. Now that is a fair price!

The 505 also has Bluetooth to connect to your smartphone. You can flick through songs on the screen when playing music on your phone from your pocket. Incoming calls and text messages pop up on the screen – if you wish.

And wifi, of course. After a ride you don’t have to turn on your computer. Just connect the Mio Cyclo to your home network or smartphone in hotspot mode with a single press on the wifi button. The upload will start immediately. It works the other way around as well. When you have made a route on MioShare, you can send it directly to the device without the need of a cable.
But there are more fun options, for Strava enthusiasts in particular. Do you want to know if you are breaking your PR or even setting a KOM as you go? The Mio Cyclo 505 is compatible with Strava Live Segments. Strava Premium is needed for this option. The pros with Shimano Di2 can see information about their gearing on the screen and afterwards read out the data in the software. 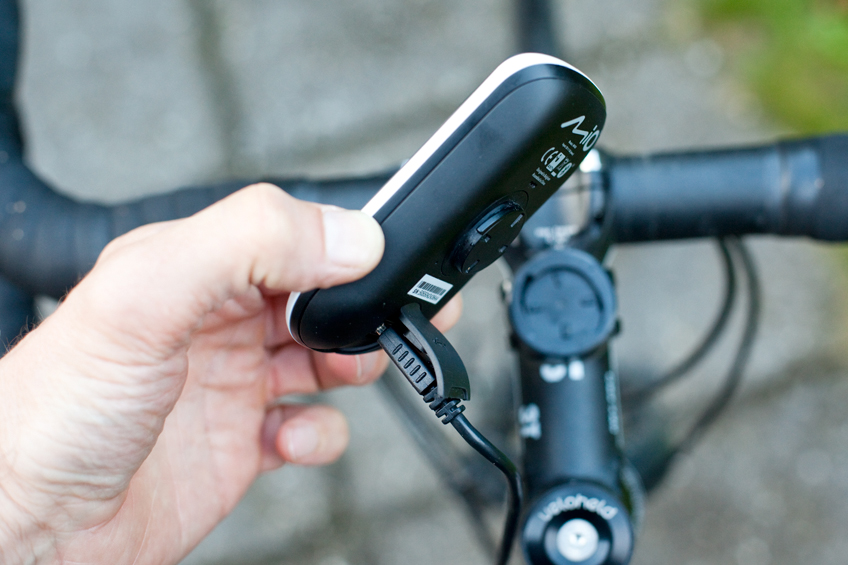 With the high resolution screen and all the extra functions the battery doesn’t last for an entire day (10 hours and over) but that is the case with most GPS devices. . No problem, the 505 has a standard USB port on the backside for charging, so out with the portable charger. But wait, on the backside? That means I cannot put it back on the stem mount – oops!

The Mio Cyclo 505 is very easy to use. No complex menus but still you will find almost anything you need (except an auto-pause function). The same goes for the online MioShare software. The touchscreen is sharp but lags when a route is loaded. The Suprise Me feature is truly the highlight of the Mio Cyclo 505. I have gone to places where I have never been before, just kilometers away from home – and that is where the adventure starts! With a couple of improvements I believe the Mio Cyclo range can be an interesting and cheaper alternative to “ye olde” Garmin.