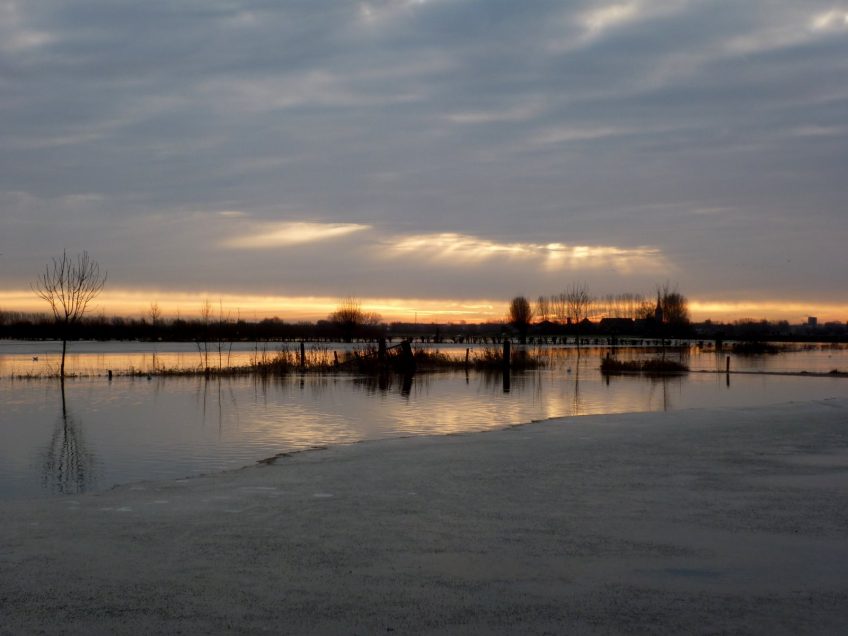 After days of snow there finally was a dry day. I was supposed to be studying that day, because my exams were coming up. But how could I? The first crit races weren’t far away, and due to the weather I was already behind on my training schedule. So that day I decided to jump on the bike instead of opening the books.

Since I was already behind schedule, there was no time to waste. I putted on some lights on my Trek 370 Sport (which was my winter bike back then) and headed off to Zwolle. Not one of my favourite rides, but the wind was blowing out north so that meant tailwind on my way back. Although there was some snow on the roadside, most of the bicycle paths were already cleared which made my ride a lot easier.

Just before I reached Zwolle I took a little break on a dike. While I was enjoying the view I heard a sound behind me. When I turned my head I saw a old farmer on a bike riding towards me. The contradiction couldn’t be bigger. He was wearing traditional farmer clothing with wooden clogs, while I was wearing a high-tech soft-shell jacket and carbon soled Sidi’s. But the moment we greeted each other, we were equal, both surviving the elements. He asked me if I had bike trouble and invited me to his home. I told him I was alright and was just taking a short break. He insisted to come with him so I could at least refill my bottles.  The old framer turned out to be a huge fan of cycling and on our way to his home we talked about the spring classics. After I warmed up with some hot chocolate and refilled my bottles, it was time to continue my ride. I promised the old farmer to visit him again if I was around and we said goodbye.

—
A couple of years later I rode to Zwolle again. I stopped by the house of the farmer, as promised. But that day I found out he is not longer with us. While cycling I come across wonderful people. And this old farmer, was definitely one of them.