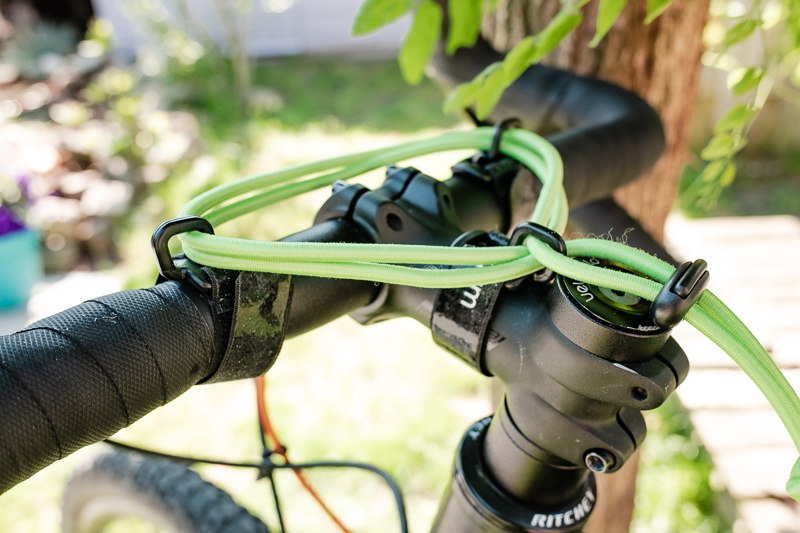 ‘Can it really be that simple?’ is the first thing that comes to mind after seeing the carryyygum. This universal solution for bike transportation consists of three loops attatched to a velcro strap with an elastic band pulled through. That’s basically it!

Well, the idea might be simple, the execution is well thought through, as we found out during our first install – which took approximately one minute. Two velcro bands go around the handlebar, the third one around the stem. That makes for a triangular shape. Just wrap all three velcro band through the opening in the carriers and back again. Now here is the smart part: these are not standard velcro straps. The backing is rubberized! That makes sure the carriers stay in place. Does that work? Yes, it does!

The rectangular loops are positioned off-centre on the carrier. On our road bike handlebars that was a slight advantage as it leaves the loops a bit further apart from eachother, without giving up hand positions.

As you can see the elastic band goes through the loops twice, so you can put stuff between them. Pull the elastic cord and you are good to go!

The carryyygum started out as a crowdfunding campaign on Kickstarter. Soon the people behind it reached their goal and put this smart solution into production.

Removing the carryyygum only takes a few seconds. Or just leave it where it is. With a total weight of 33 grams it doesn’t slow you down.

Now, let’s find out what we can carry!

The carryyygum is available in seven different colours: black, yellow, green, blue, red, pink and orange.
You can buy directly at www.carryyygum.com for € 19,00 a piece.